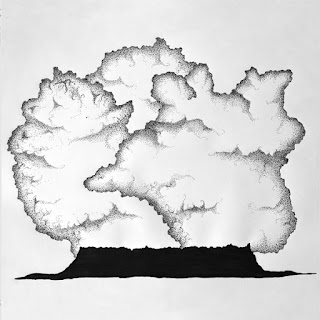 "Recorded by Jon (otherwise known as one half of Barn Owl) at home and in his practice space, Black Mesa is a reflection on desolation and the search for light in a barren land. Recorded over the span of 10 months, each track materialized slowly over time. Black Mesa features seven composed tracks of meditative, electric guitar embellished with improvised atmospherics and white light feedback. The album follows an outlaw wanderer who ventures deep into the desert only to discover the Black Mesa, a bridge between worlds (as related to string theory or multiverse theory).  Inspired by the hazy Americana of Sandy Bull, Popol Vuh and Neil Young, Black Mesa endeavours to explore the depths of drone and ambient music."